These easy spicy shrimp tacos with cilantro lime slaw are so tasty and perfect for your next taco Tuesday or any day of the week! They only require a few simple steps and are ready to serve in less than 25 minutes. Best shrimp tacos ever! {Gluten-free & dairy-free-friendly}

Hands up… who loves shrimp tacos?!

I love how simple they are to whip together, and how they’re so much fun to eat! This spicy shrimp taco recipe with cilantro lime slaw is no exception. It’s colourful, vibrant, and absolutely delicious!

Not to mention, it’s a great option for taco night that requires minimal preparation. Just mix up the shrimp seasoning, cook up the shrimp and prep the slaw.

You’ll have a quick, healthy and family-friendly dinner on the table in record time!

If you love tacos as much as we do, be sure to check out my Vegan Lentil Tacos, Crock Pot Taco Meat. and my Slow Cooker Pulled Pork which is perfect for stuffing into shells!

Why We Love these Healthy Shrimp Tacos

For the spicy shrimp tacos

For the cabbage slaw

There are only a few simple steps required to whip together these tacos!

NOTE: If you have time, allow the shrimp to sit in the marinade for at least 30 minutes. 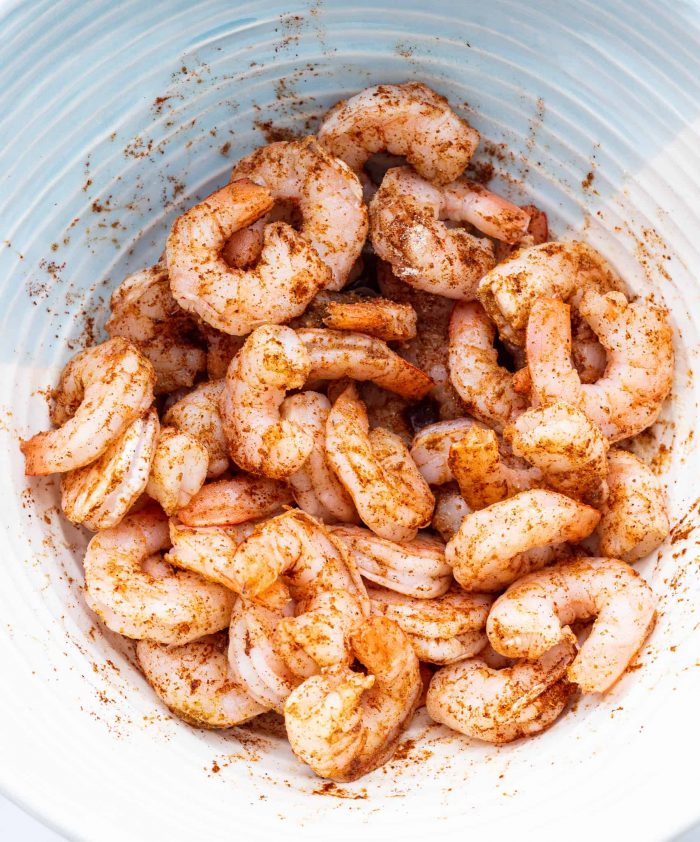 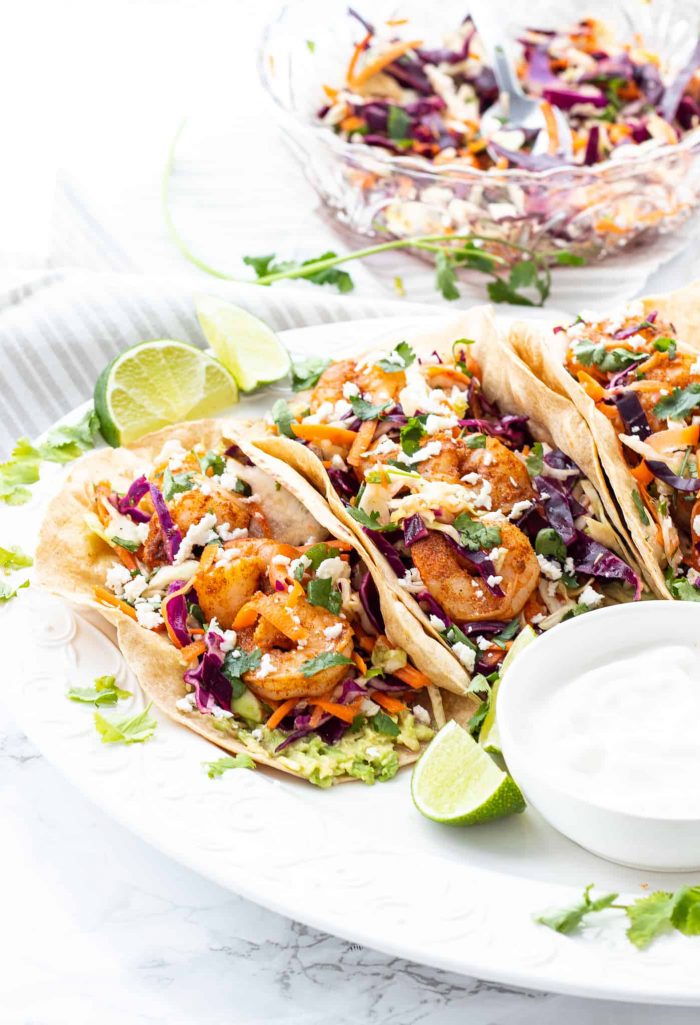 If you want to kick these tacos up a notch, you can also top them with a creamy sauce!

Avocado sauce: If you prefer to go with an avocado sauce, try this homemade avocado crema recipe. It’s really simple to prepare!

Mayo sauce: If you’d rather do a mayo sauce, try mixing some mayo with some sriracha hot sauce. I usually mix about 4 tablespoons of mayo with 2 tablespoons of sriracha. You can even add a little of lemon juice and some freshly minced garlic too for some extra flavour. Then drizzle it over the spicy shrimp tacos with slaw.

The sauce is totally optional but adds an extra kick of flavour!

Refrigerator: You can store the slaw and shrimp in the fridge for up to four days. I recommend storing them separately covered or in an airtight container and then assembling the tacos right before you’re ready to serve.

To reheat: Place the shrimp in a pan with a bit of olive oil and warm them just until they’re hot to the touch to prevent them from getting overcooked.

How to easily remove shrimp tails

Because the shrimp are served in tacos, I prefer to remove the tails before cooking so that they are easier to eat. No one wants to be picking out tails as they devour tacos!

To remove the tail, simply peel back the shell from either side of the cut down the middle of the shrimp. Pinch the tail where it meets the body of the shrimp, gently pull and it should come off easily.

How do you peel and devein shrimp before cooking?

To peel and devein shrimp, gently twist to remove the head if it’s still attached. Next, go underneath, where the legs are attached, and dig your thumb under the shell to help it release. Tug gently to remove the tail.

To devein the shrimp, lay the shrimp down on a flat surface and run a paring knife along the back. Try to avoid cutting too deep. Pull out the thin grey vein.

For shrimp with a tail, remove the shell as you did previously but leave the last segment attached, and then devein.

What type of shrimp should you use?

Personally, I like to use the peeled and deveined jumbo shrimp. I love how meaty and juicy the jumbo shrimp are. That being said, you can definitely sub in medium-sized shrimp if that’s what you have on hand.

Can you use frozen shrimp?

I prefer to use fresh shrimp, but you absolutely can use frozen. Be sure to fully defrost the shrimp before you cook them and pat them dry to remove any excess moisture.

Both fresh and frozen shrimp should be patted dry. If there is excess moisture, the shrimp will steam when it cooks and the texture will be less firm.

Can you make shrimp tacos with cabbage slaw ahead of time?

For best results, I like to serve these spicy shrimp tacos as soon as they’re ready, but you can totally prep both the shrimp and slaw ahead of time.

Both can be stored, covered in the fridge for up to 3-4 days. The slaw is so delicious, I often make a double batch to enjoy throughout the week!

Why does my shrimp taste rubbery?

Shrimp tends to get rubbery if it’s overcooked. To prevent this from happening, you’ll want to pay close attention to a few signs that indicate the shrimp is done.

First, when the shrimp curls into a gentle “C” shape and has transformed from grey to pink, that’s generally an indicator that it’s ready to be removed from the heat.

If the C looks more like an O, then it’s most likely overcooked. The most important thing when cooking shrimp is that you pay close attention and remove it from the heat as soon as it’s cooked which can help prevent it from becoming rubbery.

What are the calories in shrimp tacos?

There are 170 calories in one taco and the recipe makes about 8 tacos. If you add additional toppings such as cheese or salsa, you’ll need to account for this if you’re tracking your caloric intake.

What to serve with shrimp tacos

These tacos taste especially good when you spread the tortillas with some mashed creamy avocado and then place the slaw and shrimp mixture on top.

You can also serve the shrimp tacos with any of the following side dishes for a delicious spread: 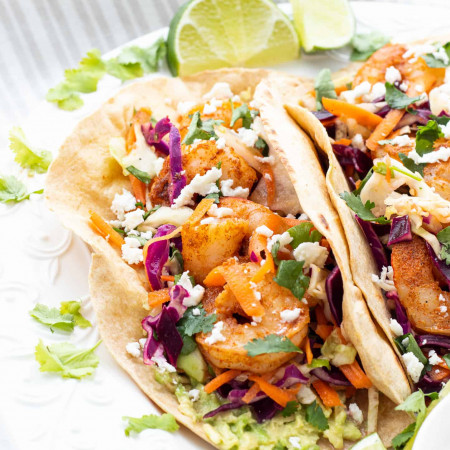 By: Elysia
Servings 8 tacos
These easy spicy shrimp tacos with cilantro lime slaw are so tasty and perfect for your next taco Tuesday or any day of the week! They only require a few simple steps and are ready to serve in less than 25 minutes. Best shrimp tacos ever! {Gluten-free & dairy-free-friendly}
Print Recipe
Pin Recipe
Share Recipe
Prep Time 15 mins
Cook Time 8 mins
Total Time 23 mins

For the shrimp tacos:

This recipe was originally published April 2020 and was updated in April 2022 to include more helpful tips and photos.

Looking for more delicious recipes? Check these out: 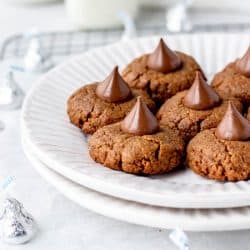 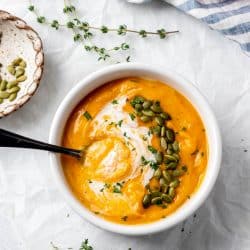 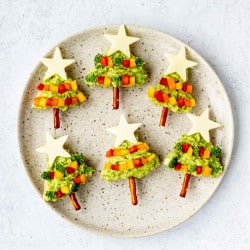 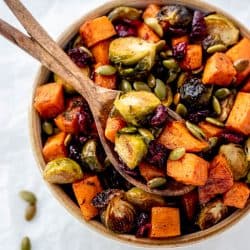